As soon as you click the 'Get My Budget' button, BudgetForLife becomes completely, 100% yours. What's happening technically upon clicking this button is that users make a copy of our BudgetForLife template and add it to their own Google Drive. And since users' budgets exist only within their personal Google Drives, we as the creators have absolutely zero access to it. Thus, the information within users' BudgetForLife spreadsheets is as private and secure as Google itself! In all honesty, we don't even know who our users are, much less what they're doing with their money. Let's contrast that with what the other guys are doing, like Mint, YNAB, Every Dollar, Personal Capital, banks, and the rest of them:
Personally, I would never use one of those other budgets. That's why we built ours in the first place!

​The Key Difference Between 'Us' and 'Them'

Why can BudgetForLife make so many claims that the major players in the industry can't? Simply put, it's because at the end of the day, the major players were intentionally built by profit-seeking enterprises and employees. They exist primarily to make money, and thus are limited to improving by only as much as makes 'business-sense' - i.e., as much as users will pay for.

BudgetForLife is a totally different story. We built BFL on accident and out of passion. We actually just really, really enjoy this stuff! Recognizing its utility, we've been giving it away for years with genuinely no catch - something you'll never be able to say about our competitors. Now, 7 years in and over ten thousand hours invested, not much has changed! We continue to iterate and improve, not because the money is suddenly flowing, but because let's face it: we can't help ourselves :)

Perhaps it shouldn't come as a surprise, then, that purpose-driven people can do more and do better than people chasing after the next dollar.

All of that said, whenever an app asks for any sort of permissions, it can freak us out a little bit. Thus, in the spirit of transparency, allow us to explain what new users can expect when getting started with BudgetForLife. If you still have any unanswered questions, please don't hesitate to reach out! 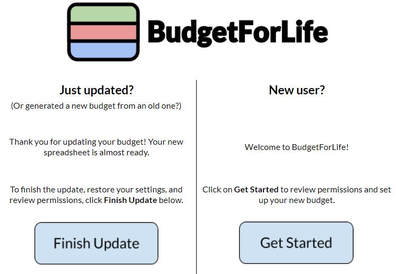 After users generate their own copy of BudgetForLife, they open it and find themselves at this welcome page. As new users, naturally they'll click the 'Get Started' button, and it's at that point where they'll come across the big, scary, permissions message: 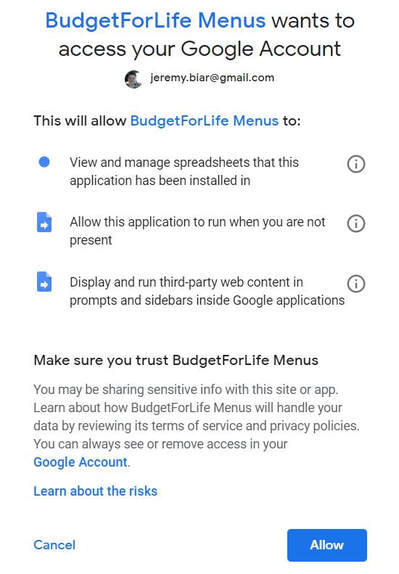 ​What does this mean? Well, first of all, it means that Google has already inspected the safety and legitimacy of BudgetForLife and given it its stamp of approval. That's a big deal! If Google didn't trust BudgetForLife, users would be seeing this message instead. Still, even though Google's already checked us out, they ask users to authorize because they want to make sure people know what they're doing. That's good news, because we want that, too :)

Notice those last several functions on the toolbar - Categories, Designations, Dates, Log, Savings, Update, and Feedback. Those are what Google calls BudgetForLife 'menus.' They enhance the user experience and allow users to customize their own BudgetForLife spreadsheets to their liking without fear of breaking it. Without them, the budget simply won't work. These menus are precisely the 'third party web content' that users are giving permission to display. These menus are what run in the background and what users give permission to 'view and manage' their BudgetForLife spreadsheet.

​After all, in order for users to add more months to end of their budget, for example, the 'Dates' menu needs to know what the current last month is. The examples could go on, but hopefully you get the point. As for the little gray message at the bottom that says 'you may be sharing sensitive info with this site or app' - that's a standard (and irremovable) warning on all Google Apps Script projects. Users of BudgetForLife don't share any information with anything or anyone.

* No one and nothing else can see or access your BudgetForLife spreadsheet but you - not even us, the creators.

* Your BudgetForLife spreadsheet can only operate within itself - it cannot see or manage anything else in your Google Drive, Gmail, etc.

* Your BudgetForLife spreadsheet does not share any of your information or data with us or with anything in any way, shape, or form
​
* These truths are unparalleled by other budgeting software out there.
Get My Budget